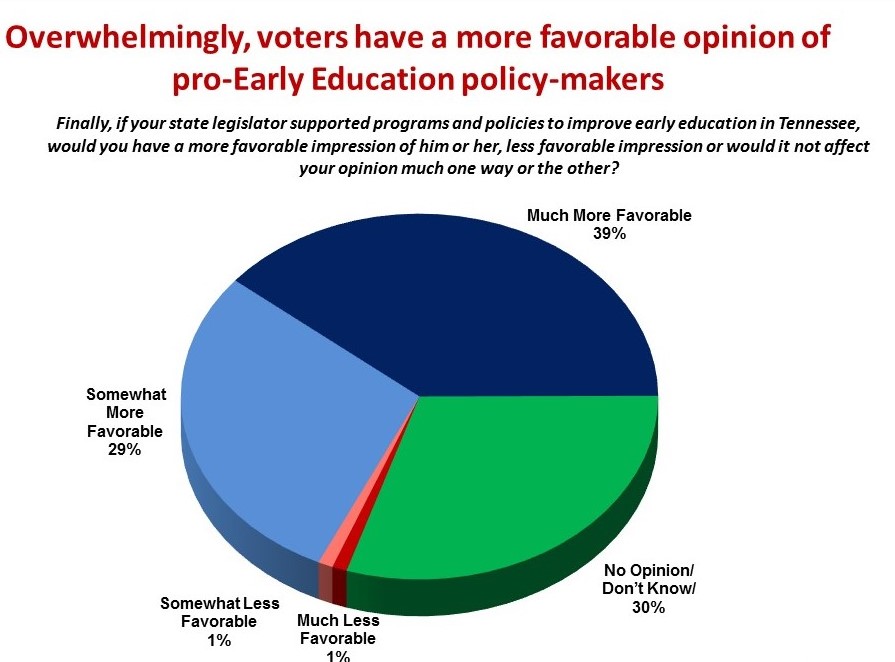 We’re excited to share with you the compelling findings from our 2nd annual statewide poll of registered voters.
The big headline from the survey is that Tennesseans overwhelmingly and enthusiastically believe that investing in expanded quality early education birth through third grade is a solution to address current deficiencies in our public schools and put the state and its students on a long-term path to success. The survey’s key findings include:

The survey was commissioned by Tennesseans for Quality Early Education (TQEE) and conducted by Public Opinion Strategies, Sept. 12-16. The survey of 800 likely voters has a 3.46 percent margin of error.
The survey indicates that across all demographics Tennessee voters believe early education is a critical foundation if we expect our children to succeed in school and life after the age of eight.
The survey explored Tennesseans’ opinions on quality early education programming supported by TQEE and many statewide stakeholders as features to improve education performance. They include early education academic policies and programs, child care and family resources that, while not fully developed in Tennessee, are overwhelmingly supported by Tennesseans.
Academic Policy
Tennesseans want to see the voluntary pre-kindergarten program accessible to all 4-year olds (94 percent) even at greater public cost (86 percent), ensure that every pre-K through third grade classroom has a high performing teacher (85 percent), increase teacher pay to attract and retain top teachers (76 percent) and invest in teaching training and professional development (89 percent).
Child care
Nearly all Tennessee voters understand the importance of quality child care as fundamental to help children get a good start in life. Ninety percent said quality child care has a big impact on school readiness, and by massive margins Tennesseans support investment in child care teacher training and professional development (87 percent), requirement that teachers complete training and certification as a condition of employment (85 percent), and expansion of state-supported child care to help bridge cost gaps for low- and middle-income families (85 percent).
Family support
Nearly 70 percent of Tennesseans support the expansion of evidence-based home visitation (EBHV) programs to boost parenting skills, reduce abuse and neglect, and help advance child learning before they enter school. Sixty-eight percent of voters support additional state investment for EBHV.
Popularity of these policies and programs is attributable to reforms initiated over the past decade that have led to gains that are both positive in academic improvements and popular with parents. But as this poll clearly reveals, we have a lot more work ahead and it must be a priority. We are ready to work with the next governor and General Assembly to make the kinds of changes that deliver results and begin to win back public confidence in our public schools.
That’s because most Tennesseans have a negative opinion of the state’s public education system. Sixty-six percent say that Tennessee’s public schools do not prepare students for the future, and 55 percent say state public education is on the “wrong track.” Almost six of every 10 parents of students enrolled today in public schools are dissatisfied with public education. Only 35 percent of respondents believe that Tennessee public education is on the “right track.”
Dissatisfaction is not surprising given the warning signs in the most important measures. Most Tennessee students in grades three through 12 are not proficient in English and math, an unacceptable performance level that ranks in the bottom half of all states. By third grade, most students are already way behind, with nearly two-thirds not proficient in English and math.
The good news in this survey is the strong support among voters for a robust system of quality education for children from birth to third grade to build on reforms that are working and to accelerate progress so that we can help all Tennessee kids get a smart start in life.
by Mike Carpenter
TQEE Executive Director